Lemmings. It’s a cute, cuddly game about a bunch of cute, cuddly creatures who have to find their way to the exit in cute, cuddly ways. Unless you get bored and decide to make them all explode. That’s neither very cute nor very cuddly. 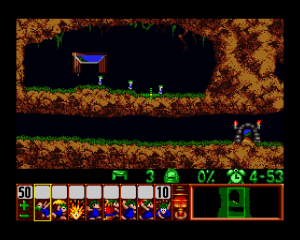 Lemmings, as seen in their rare, non-exploding form.

Now, we all now Nintendo, and how they used to go overboard with censorship, and I’m sure I don’t need to get into that. Sometimes, however, they forgot. Some times games would let a slip a ‘hell’ or two, you might find an actual, honest bar and not, as much as Nintendo would like you to believe, a cafe.

And then you find this. If you don’t believe this, go find an actual SNES copy of the game, and go to the 14th level of the Tricky difficulty. I’ll even give you the password to do it: ZZRHJPL. 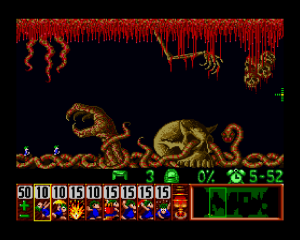 If not for the lemmings, this would be a pretty sweet metal album cover.

To be fair, this was on the original version of the game for the Amiga, a British computer. And we all know that British people are ridiculously hard to disturb, as shown by this early 80’s edutainment game, Granny’s Garden. Yes, this was a real program, used in real schools, with real children.

So yeah, point is, in the place Lemmings was actually made, this probably wasn’t a big deal. On the Super Nintendo, though, things worked a little differently, especially since the censorship-free port of Mortal Kombat II wouldn’t be out for another year. How Nintendo was OK with this, I couldn’t possibly tell you. The Lemmings guys went on to do the Grand Theft Auto series, but compared to this, that’s pretty TAME.

Cartoonishly punching somebody’s face about 20 feet into the air: BAD

A hellish landscape of rotten bodies, dangling only loosely by the wriggling veins that make up the ceiling, while snakes slither through the remains of what was probably some poor soul dying in agony?

One thought on “Nintendo’s censorship is a tad spotty.”