Horror, or rather, the concept of horror in general, has been around pretty much more or less forever. Starting off from folk stories, moving on to classic stories like Bram Stoker’s Dracula, which ended up becoming a movie nobody cared about, to a series of games nobody really cared about.

Hey, at least it's more original than Lords of Shadow. OH SNAP!

I have to admit I’m not much of a horror buff, myself. I’ve never seen a Friday the 13th movie, the bits of the Nightmare on Elm Street series I’ve caught come off more as ‘Freddy The Wacky Trollmaster’, and I’m just plain too much of a wuss to watch something like Saw. The only real interest I’ve had in that particular series is opening Wikipedia every time a new movie comes out, looking at the new deathtraps, thinking ‘Oh, that’s kind of icky’, and moving on with my life.

To get to the point, though, now I have an interest in more…. well, bite-sized forms of horror. You can take that as a terrible pun if you want, but trust me, this will NOT be the last one. Not a full-length movie, just something you can sit down for 20 minutes or so and get spooked. Shows like Twilight Zone, or probably a better example more familiar to most of you, Are You Afraid Of The Dark.

Fun Fact: M. Night Shyamalan stole the plot from an episode of this for the plot of The Sixth Sense. True story.

One of these shows, something I encountered when a stream I used to watch put it up on its schedule, was a show by the name of…

See, when you see purple letters like this, you KNOW you're dealing with SPINE-TINGLING TERROR.

The whole thing starts back in the 1950’s, back when a company called EC Comics published a series of comics under the same name. Each issue had several self-contained stories, some of which were bookended by a creepy little hermit known as The Crypt Keeper. This was apparently pretty gruesome subject matter for the time, and due to scares about comic books, the title would end up cancelled. This scare would also lead to how silly comics started getting in the 60’s, and why DC had a hard time coming up with plots that weren’t ‘Superman is being kind of an asshole’. Just look at Superdickery for proof. Be warned that it may or may not set your antivirus off, it’s been kind of abandoned for a while.

Fast forward to 1989, and HBO, the same premium cable channel known these days for stuff like The Sopranos, took the old comic series and put it up on television. It had the same basic concept, each episode being one self-contained story hosted by The Crypt Keeper. While in the comics he was a spooky old hermit hanging out in his crypt, in the show, he’s…

Yeah, he’s not doing so hot. To be fair, IF we’re assuming this is the same guy from the comics, he has to be like 200 years old. Then again, going by a certain episode going into his birth, it’s not, and he was just born that rotten. Because his mom is a mummy. Don’t ask about the logistics of that, because the show certainly won’t.
Despite his appearance, Crypt Keeper is a pretty wacky guy. His gimmick is that he absolutely must make a death-related pun at every single opportunity, or his head will explode, sort of like that bus from Speed. Seriously, the writers deserve some real credit for finding a way to fit some kind of pun into every single thing he says, even if the actual puns are pretty dreadful.

Just to tell you what we’re dealing with here, let me give you one of his pre-story monologues:

You have to admit he's a better candidate than Rick Perry.

“My fellow Americans! I am running for office because I think the political process needs a little stiff competition! It needs new bleedership! It needs someone like ME in the Fright House! But, you may ask, aren’t there a few skeletons in your closet? Sure there are! And a vampire or two, and a werewolf! What of it? At least I’m not like the man in tonight’s terror tale. He’s a fire inspector that’s about to learn the difference between rot… and wrong.”

It goes on like that for every episode. While the early episodes just have him sitting in his regular tattered outfit, speaking in a low, whispery voice. In later seasons, he starts to change costumes for each episode, and starts speaking more loudly, almost… cartoonishly. Speaking of cartoonish, do you know who does the Crypt Keeper’s voice? John Kassir. Don’t know him? Let me refresh your memory.

If you don't know who this is, get out of this blog.

That’s right. There was actually a Tiny Toons episode that’s basically a huge parody of Tales from the Crypt with Buster as the Crypt Keeper, and he’s doing the same exact voice. John does a great job with the character, including his evil laugh, which is right about near Mark Hammil’s efforts as far as creepy laughs go.

So what is the actual show about? Well, every episode starts off with the Crypt Keeper making a short introductory monologue, where he introduces the episode. They’re all about 20 minutes long and entirely self-contained. Most episodes have a  theme of ‘Asshole likes an asshole, gets sweet karmic retribution’ for it. Not EVERY episodes follows that same exact pattern, of course, but if somebody’s being a jerk, than they’re probably going to die, and die horribly.

HBO wasn’t subject to as much censorship as most of television, which means that if they wanted a woman to literally wash her own skin off, they damn well could. You know how how having sex in the Friday the 13th movies basically puts a big neon sign on you that says ‘PLEASE MURDER ME’? It kind of works like that.

The episodes vary in quality, which is understandable since the series ran for seven years, for a total of 93 episodes across seven seasons. A lot of them have special guest stars, and not just people you’ve probably never heard of, like, say, Dylan McDermott. Arnold Schwarzenegger showed up in one of these things.

And it's still a less embarrassing role for him than Batman & Robin.

So, what episodes are worth taking a look at first, if you come across the series on the internet? Well, here’s a few of my personal favorites:

The Man Who Was Death: An executioner is pissed that they don’t kill people with an electric chair, so he goes out as a vigilante and electrocutes people himself. I’m sure you can’t see where this is going.

Confession: An interrogator tries to get a suspected serial killer to confess to his crimes? But which one is which? Spooky, isn’t it? Also stars Eddie Izzard.

The Third Pig: The final episode of the show, and this one’s all animated. It’s a take on the whole Three Little Pigs story, only… well, different. Also has more 90’s cartoon voice actors than a day full of watching Boomerang. Including Cam Clarke, who was pretty much last decade’s Stephen Blum.

So how well has the show aged? Fairly well, in my opinion. The production values are pretty high, at least compared to a lot of the B-grade crap that you’d find direct to video around that time. While the plots can get pretty cheesy and cliche, there ARE times when it can legitimately creepy. Although it’s rare.

This is not one of those times. Also, the guy on the left is enjoying this WAY too much.

Tales from the Crypt must have been pretty successful while it was still going, because they ended up making three movies, two music albums, its own damn tabletop game (Which I’m really going to need to write about one day), and two children’s cartoons. One of which dealt with the worst horrors of all: Morals about sharing and staying in school. 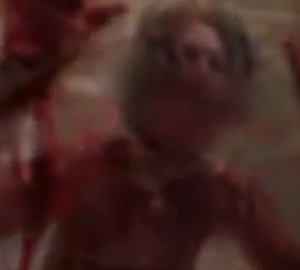 Hmm, yes, this will make a great children's cartoon.

Tales of the Crypt has been mostly forgotten, these days. The third movie, Ritual, was released in 2001, and it wasn’t until 2005 when they restored the Cryptkeeper bits they removed for international release. With the way horror as a genre’s been moving towards films like Saw, will see ever see a return of cheesy fun like this? Personally, I hope so. John Kassir’s still doing fine (He showed up in Shadows of the Damned), and seeing all those cheesy effects with modern technology would be a real… scream.